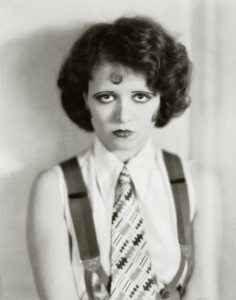 In this latest article on classic film star style, we’re looking at the beautiful Clara Bow, an icon of silent film and early ‘talkies’, thanks to her striking doe eyes and tomboy-ish sex appeal. She starred in a huge number of movies, including ‘Mantrap’ and ‘It’, both silent films – the second of which earned Clara the nickname ‘The It Girl’, a term we still use to mean the girl who’s got it all.

Clara Bow’s style combined some of the key looks of the 1920s and 30s, including the classic flapper style, finger-waved hair and menswear-inspired pieces. Her naturally curvy yet slender figure suited a multitude of dress styles, mainly because it was combined with a feisty and irreverent sense of humour that helped her to become such a success. 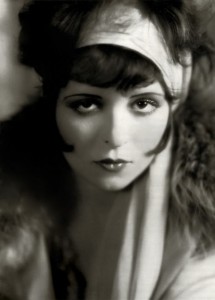 Her use of menswear-inspired style in films is still a big trend for contemporary women, and far from making a curvy girl look too ‘mannish’, it provides an interesting and fashionable contrast. Try a regular blouse worn with a man’s tie, or fitted suit trousers with a waistcoat and frilly shirt. Clara’s patterned tie and braces combination looks cute when worn with the unexpected sleeveless shirt – although maybe not for winter! 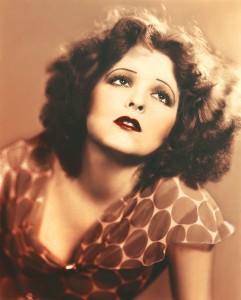 Clara Bow was also well known for her red-hued hair, which she dyed with henna. Her striking locks help to frame her face in a very feminine way – essential if you are planning on wearing a menswear-inspired outfit. Just like Clara Bow, try using patterned scarves tied in different ways to draw attention to feminine features and add a little colour to your outfit.

Despite her fabulous wardrobe, this sultry star is best known for her makeup. Cupid’s bow lips, thin, arched eyebrows and heavy eye makeup were all key features of this star’s look, helping to add a sexy yet ladylike edge to her masculine clothing. This is a great style for autumn, too – use dark berry coloured lipstick and a dark eyebrow pencil to create a striking look that’s perfect for nights out. 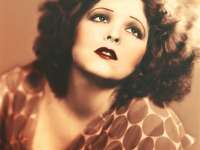