The World’s Most Expensive Bra – but is the cost of a good bra the sign of how good it is?

Sitting pretty in the Guinness World Records is the Heavenly Star Bra, created in 2001; the most expensive bra in the world! Valued (at the time of creation) at a cool £8.6 million, this certainly wasn’t a bra intended to go through the wash with the rest of your smalls. And it’s likely to have increased in value since supermodel Heidi Klum kindly showcased the dazzling piece eleven years ago. 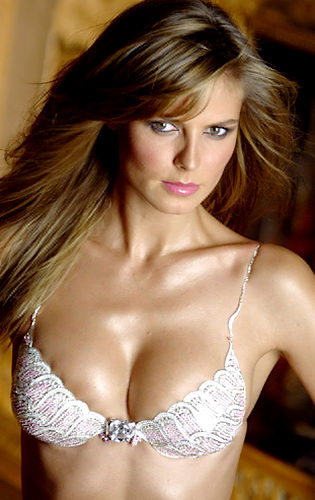 So why so expensive? Well this beauty was created using over 1,000 pink Sri Lankan sapphires which made up the cups of the bra, and nestled at as a centrepiece was a 90ct diamond in an emerald cut; a tad over-zealous perhaps?

It may be a stunning creation, a piece of art even, but is it then still a bra? Designed to give lift and support to the female breasts, and ideally we want them to go unnoticed giving us a smooth and seamless silhouette, the bra has a function, a purpose. We could be wrong, but the selection of thousands of multi-faceted diamonds as the primary material seems like an impractical choice. The function of the bra would be questionable to say the least, let alone its versatility.

It begs the question – do we get what we pay for? Well in some respects, yes: pay too little for your lingerie, and you can only expect a certain level of quality. Fabric, underwire, lace: these are all elements giving you the support you need from a bra, so if these are no good, then really neither is your bra. Material costs money, and if you’re only prepared to pay a small amount, then you can only really expect to receive a short shelf life from your breasts supporting act.

Don’t be mistaken, we’re not suggesting you break the bank for your underwear, but try to consider what it is you need it to deliver  when making your spring wardrobe purchases for example. It would be better to buy fewer high quality bras than hundreds that even if worn together, won’t give you an ounce of support!

It goes without saying that any girl might quite like to own her own diamond encrusted set of lingerie, but perhaps a few crystal detailing will suffice? And cause less damage to the inside of your washing machine…

The World’s Most Expensive Bra – but is the cost of a good bra the sign of how good it is?